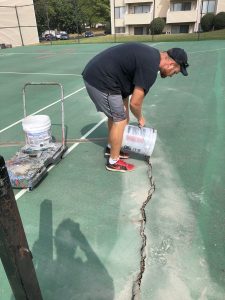 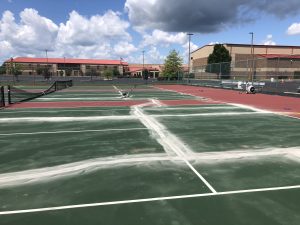 When you get cracks in an asphalt court, it is vital to understand that you are looking at a symptom, rather than the problem. Patching a crack and recolor coating is going to temporarily hide the symptom, but will do nothing to prevent it from recurring. You might optimistically disagree with the preceding statement, but we can assure you it is 100% accurate, even though a court will look perfect after patching and recolor coating. The cracks will return!

The following represents a listing of the types of cracks that you may encounter, followed by a brief description of each. Following these “definitions”,  you will find that the next section explains the most probable causes of each of the types of cracks and the alternatives with respect to repair or renovation.

HAIRLINE CRACKS— very narrow, both sides of the crack level.  The crack has been there for a long time and has not grown in either length or width.  In many instances, they are caused by the evaporation of oils and binders in the asphalt. The surface material has shrunken and cracked. These cracks are surface cracks and usually do not go all the way through the asphalt slab. The color coating and surfacing materials on a tennis court can help hide the imperfection

VERTICAL DISPLACEMENT CRACKS — cracks of varying widths where one side of the crack is higher than the other.  They are very dangerous on a court because tripping becomes a major hazard. They are almost always the result of underlying soils movement, caused by expansive soils having varying degrees of moisture. This action has pushed up the surface, broken the asphalt and the course of “least resistance” is to allow one side of the crack to be lifted. The message is, that you have underlying soils problems and moisture is getting into the soils. Because the rupturing of the asphalt is so complete, temporary grinding down and patching is virtually guaranteed to fail. You need to address the moisture getting under the court (the least expensive approach) and/or digging out the court, reworking the soils and putting down new asphalt OR you can consider remedial moisture remedies and what is call an OVERLAY (see later discussion).

UPHEAVAL CRACKS (a crack of varying width where both sides are uplifted). They are usually indicative of root damage. This is a root growing under the slab and lifting the asphalt to the point of cracking. The upheavals and cracks normally have a pattern that can be followed to determine the location of the offending tree. The solution is removal of the asphalt, excavation of the root (you can’t leave it to rot and collapse the asphalt), compaction of all of the soils and then hot patching with new asphalt.

DEPRESSIONS (Bird Baths) (low spots that are saucer shaped in varying sizes).  They are usually caused by underlying soils that have settled. Underground soils will settle because they were not properly compacted in the first place, or because water is flowing into them and erosion or natural compaction is taking place. The good news is, that if it isn’t water related, once the settlement has taken place and stabilized, the depression on the court is usually filled with patch binder (A mixture of an acrylic polymer emulsion, silica sand and portland cement without a high incidence of recurrence.

UPHEAVALS – (high spots, like an upside down saucer, with the areas of varying sizes).  In many cases are underground soils that have expanded, but not enough to crack the surface. Look to soils moisture related problems or excavation and remedial soils work. If the situation has stabilized, it is possible to grind down the uplifting or heat up the asphalt to remove a sufficient amount to level the area, followed by color coating. The other major cause of upheavals is underground growth of a root or some form of plant life.

LINE CRACKS  (cracks that are primarily on, adjacent to or follow the playing lines). They are caused a heat differential from the lines dramatically reflecting more sunshine (and therefore more heat) than the adjoining surfaces. The resulting varying rates of expansion cause the asphalt to crack. If the cracks are limited to the surface (i.e. not through the entire slab) they can normally be repaired and recolor coated. If the lines are applied correctly, there is hope that they will not reappear.

NET POST AND CENTER TIE DOWN CRACKS are caused by the concrete footing coming flush to the surface. Thus, the adjoining asphalt and concrete with different rates of expansion soon crack. Normal patching and color coating soon has these returning. Best solution is to thoroughly clean the cracks, widen them to about 2/16″ and fill them with a permanently pliable waterproof material (upper surface containing sand) that can accommodate the expansion/contraction movement, but can minimize the reopening and admitting water.

SLIGHT REDISH UPHEAVALS – (Iron Deposits in the asphalt) The first thing to accept is that there is water under the court (hydrostatic pressure) which is forcing its way into the slab. The second issue is that the asphalt contains reactive aggregate. Color coating over the stains will look good for a few months, but the stainswill bleed through again. The first step is to address how the water is getting under the court. The next step is to examine the court during the early morning or late afternoon, or by flashlight, conditions which will more clearly reveal the upliftings. Each uplifting needs to be dug out, the reddish/brown powdery material cleaned out and the cavity patched before recolor coating. It is labor intensive, but it is the only way to permanently get rid of the problem, provided you have solved the source of the water intrusion.

GROWING CRACKS OF SIZABLE LENGTH — varying width, growing in width and can be measured as being wider when the slab is cold and narrower when the temperature is higher. They might have started out as a “cold joint” (when the court was built a portion of asphalt cooled before the adjoining layer was placed next to it) or it might have been created by soils movement. In almost all cases it is soils movement that has found “the weakest link in the chain”, a seam between two sections of asphalt. This has caused a relatively straight-lined crack. Irregular cracks of considerable length are unrelated to any paving issues and are simply underlying soils movement that has cracked the surface. Once these cracks are above a certain size, you can never patch them and keep them sealed because they have become entirely separate slabs as far as concerns expansion and contraction. Even pliable sealant in them will be ruptured. Again, you need to look at water related, issues, remedial soils work and consider an OVERLAY.

CRACKS THAT SEEP WATER (varying widths and length; water comes out of the cracks for a few days after it rains and there are normally slight stain marks left from where the water has evaporated and left calcium or other deposits) They are a clear indication of what is called hydrostatic pressure. That is, water getting in under the slab and pushing up. Patching of these cracks is difficult because you not only have the normal problems of asphalt patching, but you also have the underside water pressure. Search for how the water is getting there and sometimes you can solve the issue by vertically drilling in under the court and inserting a perforated drain line to bleed the moisture out of the soils. Again, attach the underlying problem, not the symptom.

CRACK PATCHING ON ASPHALT COURTS – Once asphalt cracks, other than the exceptions stated herein, if the underlying causes are not addressed, the cracks are going to come back. Even after addressing the underlying issues, patched or reheated asphalt will still tend to re-crack because these cracks have become expansion joints. Short of taking out the offending soils and cracked asphalt and starting over from scratch, the most effective approach is to do an asphalt OVERLAY.

ASPHALT OVERLAYS – If you have a badly cracked asphalt court, even after addressing the water related issues, you still have a problem. The problem is that, almost invariably, part of the issue has been the underlying soils which need to be either reworked or taken out entirely, replaced and followed with new asphalt. This usually costs a significant amount and the cost can be accelerated by limited access to an already existing court.

After addressing moisture related drainage and settlement problems, you can hopefully assume that the soils under the court are going to settle down. AT this point, crack patching and color coating will make the court look good until the heat/cold induced expansion and contraction causes the old cracks to reopen. Once they reopen, they will allow water directly into the soils and the cycle will start all over again.

An option to this scenario is a process call an OVERLAY. This involves patching and sealing the cracks, bonding over them with a very high strength material and then covering the entire court with a heavy duty paving fabric which is bonded down with a hot asphalt oil. The entire court is then covered with 1 1/2 ” of new asphalt, sealed and color coated. Net posts, center tie down and gates are raised approximately 1 1/2″ and you virtually have a brand new, much stronger court than the original court. We have had excellent success with overlays.

"Schubert Tennis exceeds all expectations. Their quality of work and level of knowledge are unsurpassed. Their craftsmanship coupled with their excellent communication made working with the Schubert Team a wonderful experience. We look forward to working with them again."

“Our experience with Schubert Tennis was an incredibly positive one…. We manage over 15 Clay Court facilities throughout the country and aim to provide our members with a first class experience on the court. Schubert Tennis delivered that experience with a wealth of clay court knowledge, attention to detail, training of our staff and a very responsive approach to any questions we had... I would recommend Schubert tennis to anyone serious about providing first class tennis courts to their members.” 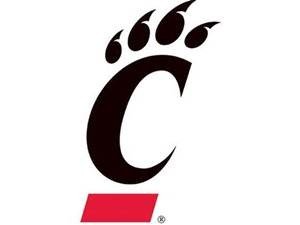 "Rusty Schubert is one of the most trusted names in tennis in the Greater Cincinnati area.... What sets Schubert Tennis apart from the rest is the customer service always provided by Rusty and his staff. Your tennis needs are always in the very best care with Rusty Schubert and Schubert Tennis !"

“Working with Schubert Tennis this season has been a breath of fresh air in this industry. Rusty and his crew have gone above and beyond to make sure that all of our preseason needs were taken care of. Our clay courts are in the best condition they have been since I have been the Director at Kenwood Country Club. I highly recommend Schubert Tennis and would be happy to share my experience with anyone, anytime.”